The VK5ARG Amateur Radio Experimenters Group recently launched their Horus 49 high altitude balloon flight. Below is a short analysis of some of the telemetry from that flight, provided by Mark Jessop VK5QI of rfhead.net.

The Horus 49 flight was launched from the Mt Barker High School Oval in Mount Barker, South Australia. Total flight time was about 2 hours and 15 minutes from launch to landing, with a maximum altitude of 36395m.

It looks like there was a little loss of LORA telemetry right after balloon burst.

One of the most interesting plots to me during balloon flights is ascent rate and the Horus 49 ascent rate is sure interesting. Here is a graph of the ascent rate from launch to burst of the balloon:

To me it looks like we can pretty easily separate the ascent rate into three distinct sections.

Right now I’m going to look past the periodic nature superimposed on the ascent rate. I’ll come back to this later.

This first and third phase is new to me. When I reviewed the ascent rate for NOEXC’s NBP3 I only saw what appears like the second phase of vertical ascent in the above graphs.

To help get an idea of what might be going on I took a look at the horizontal speed vs altitude: 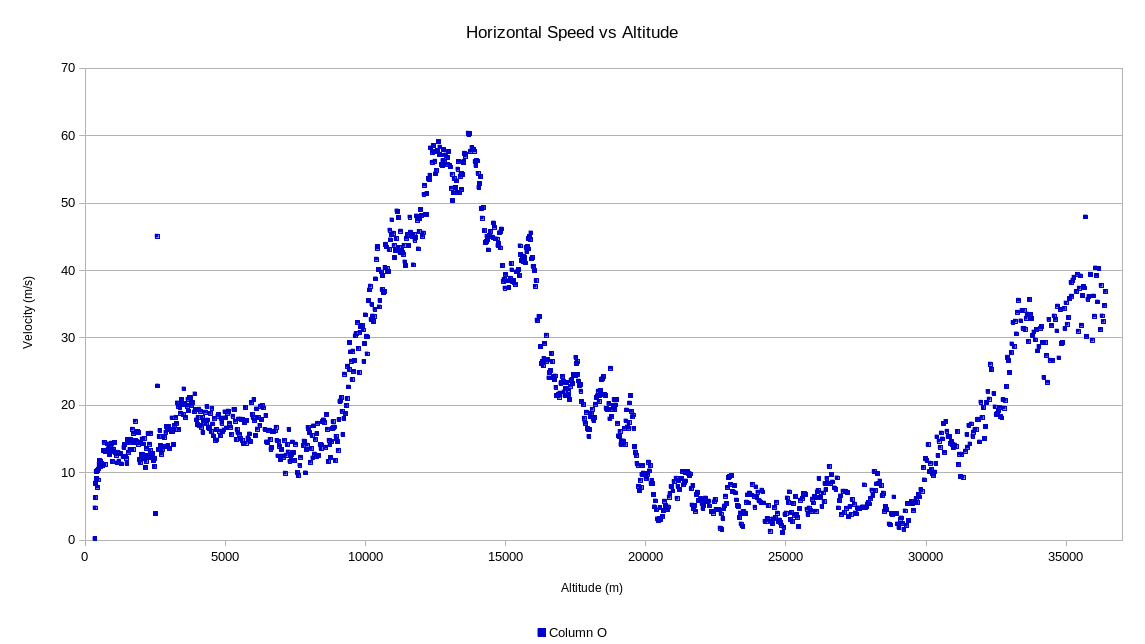 Very interesting. There are a few things to note.

I’ve split Phase 2 into two parts 2a and 2b. Looks like there’s a jet stream during phase 2a. Phase 2b seems to be out of this jet stream and into a new section of atmosphere. Let’s also take a look at the bearing vs altitude to see what sort of variation we have. 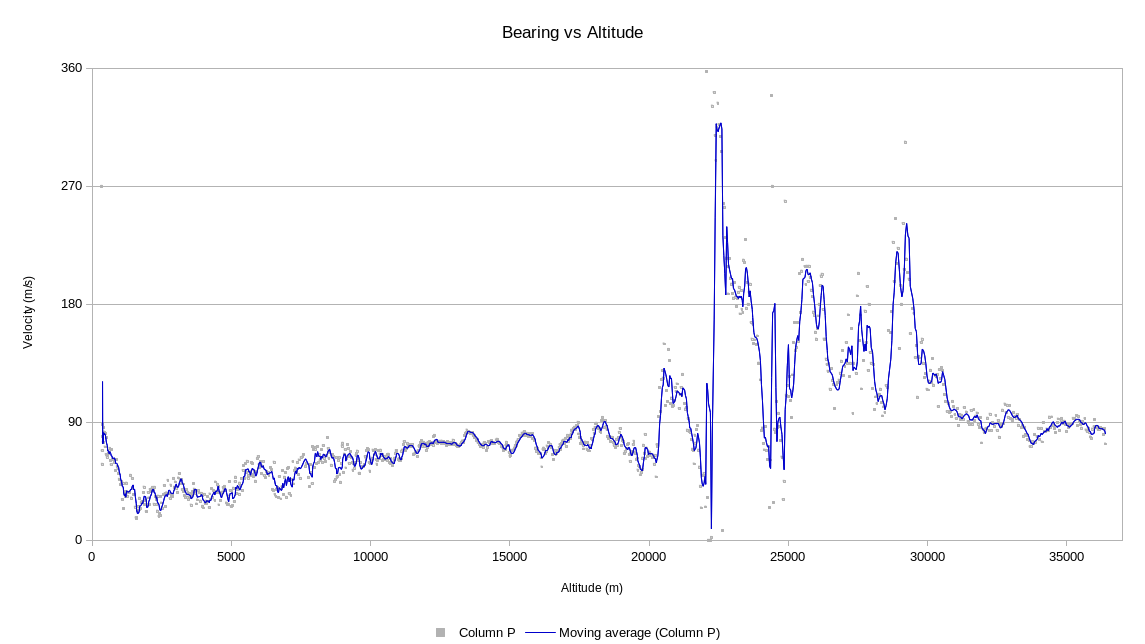 From this is looks like much of the flight deals with winds that are very steady in a constant direction, all except one. When the winds die down from 20km to 30km, phase 2b, they become pretty variable. All the while the ascent rate of the balloon is increasing.

After burst the balloon quickly descends through the atmosphere:

It looks like there was a short loss of lora telemetry after burst. It looks like the balloon could be traveling around 80m/s (288kph! 179mph!) at this point. Nice! The payload includes a small parachute which I assume is the main contributor to drag during this descent. This curve is pretty noiseless, and do note it looks like the periodic modulation doesn’t show up in the descent. Hmmm…

In the troposphere the pressure and temperature drop as we move up in altitude. If we assume there is no energy input into the balloon it should become more buoyant given these parameters, which we can clearly see.

The tropopause is defined where the drop in temperature halts, and turns around. In the stratosphere the temperature then increases with altitude for a while. Phase 2 in the above graphs correspond well with the start of the stratosphere. I have yet to explain and model the decrease in ascent rate in this portion of the ascent. I’m currently thinking it will take some thermodynamic model to produce these effects. This is further work that I am quite excited about.

It seems like there is a point at which the ascent rate becomes constant at about 29km! What?! I’m again not quite sure what causes this.

Reading about rubber elasticity on Wikipedia and a few other sources it looks like just before failure of rubber there is very little change in length (surface area on a sphere) with increasing force. If the force continues increasing linearly maybe the balloon reaches this regime and does not change in volume much right up to the point of failure (burst). (Maybe that’s a good guess?)

There’s another big thing to note though: and increasing horizontal speed! Is this yet another jet stream?

Periodic Modulation of the Ascent Rate

There is a very clear periodic signature superimposed on the ascent rate. I’ve seen this before, but not over the entire ascent. Phase 2 and 3 clearly show this signature, Phase 1… not so much.

Do you have guesses?

Do you have an explanation for the above? Contact me on twitter kg4sgp or any other way. I’d love to hear from you!

Thanks again to Mark for sharing this telemetry, to the VK5ARG Amateur Radio Experimenters Group, and to the Horus 49 team for a fun flight to follow and analyze